In 1818, a travellers guide book "Excursions in the County of Essex Vol 1" was published. The section on Maldon and Heybridge is reproduced here:

MALDON. This is an ancient and populous borough and market-town, and the principal of the Dengey Hundred : it is situated on the acclivity of an eminence south-west of the Blackwater. This town has been frequently pointed out as the Rolam Camulodunuim ; but upon very slight grounds, as the earliest mention of Maldon by historians is in the year 913, when Edward the Elder encamped here to oppose the incursions of the Danes, whilst a fortification was constructing at Witham. In the year 920, he again encamped at Maldon, and according to Marianus built a castle here; but as no traces of this structure have been found, it seems probable that Marianus alludes to the entrenchment or fort before mentioned, which lies on the west side of the town, and apparently enclosed about twenty-four acres. Being of an oblong figure, three sides of the rampart have lately been traced, the other is defaced by buildings. This place was of considerable strength, as, in 921, a large Danish force besieged it without effect. In 993, it was again attacked by the Danes under Ulaff, when the forces of the Earl Byrhtroth coming to its relief, they were defeated, and the Earl himself slain. In the Domesday survey, Maldon is styled a half hundred ; and had then 180 houses, and a hall, held by the burgesses of the king, who had also a house here.

The first charter constituting Maldon a borough appears to have been granted by Henry the Third, at the request of William de Mandeville, Earl of Essex. By this grant, Maldon was exempted, from all foreign service, except the finding one ship occasionally for the king's use, for forty days, at their own expense. By another charter granted by Queen Mary, in 1554, the borough was incorporated, and its government Vested in two bailiffs, to -be chosen annually; six aldermen, eighteen capital burgesses, &c. The right of returning members to parliament here is in those who obtain freedom by birth, marriage, servitude, or otherwise. The first return was made in 1295 ; and the custom of borough English by which the youngest son succeeds, according to the burgage tenure to estates, on the death of his father, still prevails here. The charter was lost in 1768, and re-granted in 1810. The town is now governed by a mayor, aldermen, &c.

Maldon at present consists of one principal street, running nearly a mile east and west ; a cross street of considerable length, and several smaller avenues and back lanes. The descent from the upper part to the river is very steep ; and many of the houses built within the last half century are good. The import trade is considerable consisting of coal, iron, deal, corn, &c. At spring tides the river will bring up vessels that draw eight feet water; but the coals are brought to the town in lighters. Maldon had formerly three parishes, but the vicarages of two of them have been long consolidated. The church of All Saints, which is the. principal, is an ancient and spacious building, with an equilateral triangle tower, which is almost unique, terminated by an hexagon spire. In the south, or D'Arcy's aisle, three chantries were founded in the reign of Henry the Sixth, by Robert DArcy, esq. of Danbury. On a stone of white marble in the chancel is a Latin epitaph which has been thus translated: - The deposit of John Vernon gent., Turkey merchant, who hath often crossed the seas, tempted thereto not so much by the love of gain, as an ardent desire of beholding the wonderful works of God in the deep. He boasts of this sepulchral stone as not the least reward of his labours, it being discovered among the ruins of Smyrna . he also brought to light some choice ancient manuscripts, monuments of that antique city ; With these he enriched his native country. He is now safely arrived at the haven of rest. He died January 28th, 1653, aged 84.

The town-hall, a large ancient brick building, near this church, was built in the reign of Henry V. by Robert D'Arcy, esq. St. Mary's church, in the lower part of the town, is a spacious pile, and said to have been founded by Ingelric, a Saxon earl. The tower is a massy structure, and, with part of the church, was rebuilt in the reign of Charles the First. St. Peter's, the parish united to All Saints, had formerly a church, of which the tower only remains. Adjoining to this is the grammar-school and library, erected by Dr. Thomas Plume, Archdeacon of Rochester. This gentleman was born at Maldon in 1630, and in the latter part of his life became a great benefactor to his native town; and appropriated the rent of a farm at Iltney, in the parish of Mundon, to keep the school and library in repair. He also gave 200l. to build a workhouse for the poor, and about 1000l. more to establish the trade of weaving sack-cloth to employ them. Through a bequest of 1902l left by him for that purpose, the Plumian professorship of astronomy and experimental philosophy was founded at Cambridge. This truly benevolent clergyman died in the year 1704. The population of Maldon is 2679, and the market is held on Saturday.

HEYBRIDGE is a village opposite Maldon on the northern side of the Blackwater, and is supposed to have derived its name from an ancient bridge of five arches, beneath which the main stream is said to have formerly run, though now it flows at some distance through Full-bridge. Its original name appears to have been Tidwalditune, as by this name, this and. twelve other lordships were given by King Athelstan to the Cathedral of St. Paul; and it still belongs to the dean and chapter, together with the ancient manor house called Heybridge Hall.

Between Heybridge and Maldon is a raised causeway, which was made before the time of Edward the Second, who ordered it to be surveyed in the year 1324. 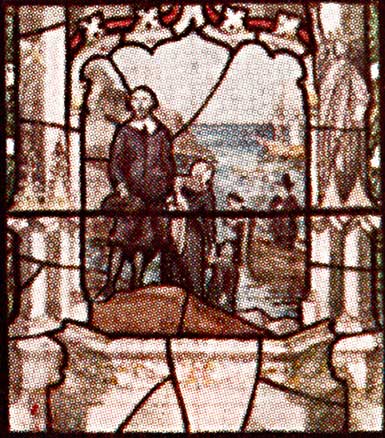